Sometimes we feel we are on an island with no one who understands the problems and situation we face.
Raising other people kids is hard, rewarding, frustrating and sometimes downright funny.
Please join in the discussion by adding your comments and experiences.
Note: all comments are moderated. Please no disparaging remarks!
Everyone is here to share and learn.

You would assume that kids who have been denied food most of their life would eat anything!  Wrong!!

The terms Breakfast, Lunch and Supper were non-existent in their vocabulary.  By the time they were finished with one meal they were asking what we would have at the next meal.  They always wanted to know that there was something more to look forward to.

They seemed to remember hot dogs cut up in spaghetti-o's and that is about all they talk about having to eat.

Being children of an alcoholic mother, they crave sugar.  While they won't drink a glass of milk, they do like sugary breakfast cereals.  I have known recovering alcoholics who eat ice cream by the cartons.  Nutritionist say that the refined sugar and the milk/sugar combination turns into a form of alcohol in the digestive system, which may explain the cravings.  Too much sugar is linked to Hyperactivity and Attention Deficit problems, and when added on top of the Fetal Alcohol Syndrome, these kids get a double whammy.

When we first met our kids G12 was 6 years old.  We never saw her eat anything except a bag of chips (usually cheese flavored Doritos) that she would carry around all day long.  It seemed as though as long as there was one chip left in that bag, she felt secure.  Most food, even the "kid friendly" foods, seem repulsive to her.  We suspect that some day she will have her own pantry stocked full of cheese Doritos and Hot Cheetos!

Our B9 was only 3 when we met him, and I can't say that I ever saw him eat much of anything unless there were biscuits or sweet rolls available.

As infants, formula could be obtained free, but solid foods, even baby foods, were not around.  They never learned to eat food, to experience the taste and texture in their mouth.  Now as they get older, it is much harder to do.

When B9 came to live with us a year ago he was losing weight fast.  The first few months we struggled to get him to eat anything.  Then, much like a toddler, he decided he liked bologna and ate nothing else.  After a few months it was chicken nuggets and nothing else.  Now he has discovered peanut butter and that is his mainstay.  He is beginning to be brave enough to try a bite of what we are eating.  We will ask "Do you like it?"  He will answer "yes".  But if we ask "do you want some more" and answer is almost always "no".

We have tried to work nutritious food into their diet, starting with the most bland or kid friendly foods.  Corn is tolerated because it is somewhat sweet, peas roll down the throat and can be swallowed without chewing, same with mandarin oranges because they slide down whole.  If we try to get them to actually chew their food, the facial expressions show their distaste for the texture.  B9 can't eat a grape because of the texture when he bites into it.  G12 won't try anything new without a fuss.

After trying unsuccessfully to get them to eat, I finally resorted to chicken nuggets 3 times a day.  At least they ate without causing chaos!

Organized sports, which he started a year ago, may have been a true lifesaver for B9.  It gave him an appetite, and with encouragement from the coaches who he respects and wants to please, he has decided in his own mind that he needs to eat lots of good food.


We want to hear from you . . . please feel free to leave a comment!
Sign up to receive an email when updates are added -

One of the symptoms of the abused and neglected child are the LIES!  It goes far beyond the "normal" lies and stories that most children tell.  They lie about everything - even things that don't need to be lied about.

We had felt like we were making some progress in this area, but the last few weeks have proven that the problem is escalating, and creating a situation that is potentially harmful to our own well being.

Several years ago one of "our kids" older sisters who lives in NO with their mom, asked the kids stepfather if she could come here to live.  When he said no, she told authorities that he had sexually abused her.  This resulted in an investigation by CPS.  Our girls were very aware of what had transpired and the chaos and hurt that their big sister was able to inflict on their stepfather.

When our G12 turned her lies on us, we had no choice.  We cannot open ourselves up to this type of accusation. We will still be able to spend time with her, but it will be at stepfather's house.  It makes us very sad not to be able to have her around.

We think that G12 feels trapped in a triangle - she isn't sure who she should be loyal to;  her big sister "mom"~ her stepfather ~ or us.  We feel that taking ourselves out of this triangle might be beneficial to G12 in that she may be forced to bond with her stepfather, something that she has not done to this point.

For those of you who know and love G12, we hope you understand and continue to love her as we do!
S
Posted by Stephanie at 8:30 AM No comments:

I heard a disturbing confession by the "Octomom" the other day.  She stated that she had not been able to bond with her 8 babies.

There is much written about this phenomenon, sometimes called Attachment Disorder or Reactive Attachment Disorder.  It is often linked to babies left tied to beds in orphanages, babies of alcoholic or drug addicted mothers, or mothers that do not have that nurturing instinct. 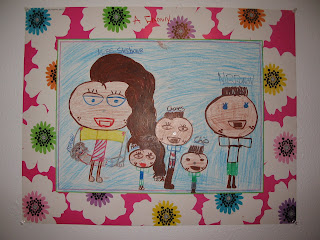 Several years ago, when our oldest G14 was 11 or 12, she drew a picture of "our family".  According to size, I could identify mom, dad, sister and 2 brothers.  "Where are you?" I asked.  She pointed to a baby in the mom's arms.

She knew something that I was not aware of at the time - that kids who have Attachment Disorder must be allowed to go back to that infant state and progress through the stages of toddler and childhood in order to overcome the long-lasting effects of this lack of nurturing.

At the time, I gave a copy of this picture to her therapist, aware that it had a message, but not sure what I was supposed to do with this information that she portrayed in her picture.  Looking back, I am rather miffed that the therapist did not help me understand how to help G14.

G14 came to us when she was 8 years old.  Because of her fierce loyalty to her mom who had abused and neglected her, she had a thick wall up and fought me on every front.  The more I worked to break down the wall, the more resistant she became.  We finally had to let her go.

I will write more about the symptoms of Attachment Disorder, and I hope it will help others understand how to be aware and help their special kids.

S
Posted by Stephanie at 7:07 AM No comments:

Our B6 is a rather typical barely-six year old, although we see lots of toddler type behavior in him.

This morning after breakfast he pulled his shirt up to show his sister how full his tummy way.


It is difficult to see a 12 year old girl - tall, slender and developing, but hear the chatter of a toddler.

We see so many examples of kids who have been emotionally neglected.  Some behaviors are much younger than their age, and at times we see them regress to even younger behavior.  As much as possible, we accept this, and at times we attempt to gently lead them to "older" behavior.  Reprimands are saved for the most critical situations.

There is a belief that children who do not receive proper nurturing from (and possibly before) birth, must be given the opportunity to revert back and be allowed to work their way up through the infantile and toddler behaviors in order to be able to continue growing emotionally.